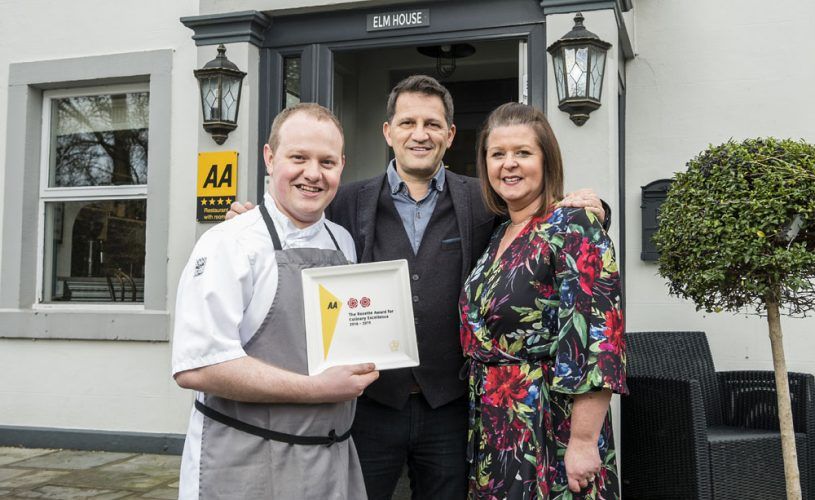 An Ullswater-based restaurant with rooms, 1863, is celebrating Christmas early as news emerged last week that the young and dynamic team have secured a second AA Rosette along with a Breakfast Award in a recent AA inspection!

These two accolades round off an impressive 12 months: in late 2017, the team received four gold AA stars for their accommodation along with their first AA rosette for food. Back in March 2018, they were finalists in both the ‘Taste’ and ‘Guest Accommodation’ categories in the coveted Cumbria Tourism Awards while they won the ‘Readers’ Award’ in the Cumbria Life Food and Drink Awards.

From a food perspective, this second rosette puts 1863 into the top 10% of restaurants in the country. The AA Rosette scheme has long been established and successfully recognises cooking at different levels nationwide. The success or failure in achieving Rosettes is based on a single (sometimes multiple) visit to a hotel or restaurant. Essentially it’s a snapshot, whereby the entire meal is assessed.

Recognising what a special combination of skill and dedication they have in their team, owners Anne and Mark Vause have also taken the decision to broaden the remit of ambitious, young head chef, Phil Corrie by appointing him General Manager.

On the move, Mark commented:

“We are a 20 strong team which means that while we might be larger than people initially think, we are still agile enough to take good business decisions at a pace. Phil is an exciting young chef and a joy to work with. He knows the team inside out and we feel is best placed to manage the day to day direction of both the team and the food as we keep pushing forward.”

However, that does not mean that Mark and Anne will be taking a back seat. They are still very present in all things 1863. When they’re not working the floor with the rest of the Front of House team, you’ll find them serving drinks from the bar to the many loyal customers the business has secured over the last two years.

On news of the award, Head Chef and now General Manager Phil commented:

“I’m not ashamed to admit that I shed a tear or ten at the news that we’d been awarded a second AA rosette. I’m so proud of what we’re doing here and industry recognition in the form of awards is really very gratifying. The team are all working so hard and pulling together and I think customers see that and appreciate it.”

When asked what 2019 holds, Phil is unusually reserved. The young chef and graduate of Kendal College will undoubtedly always be striving for better, however, right now he claims the focus is on Christmas and ensuring that each and every dish that goes out deserves its AA rosettes.

With a choice of two Christmas menus – A La Carte or Tasting – featuring festive-inspired flavours (but no turkey this year – they’ve gone for goose!), the restaurant opens at 6pm daily. Booking is strongly advised for bookings in December. To book, call 017684 86334 or book online. Gift vouchers are available online hereor by calling direct on 017684 86334.  For further information and the Christmas A La Carte and Tasting menus, visit www.1863ullswater.co.uk.