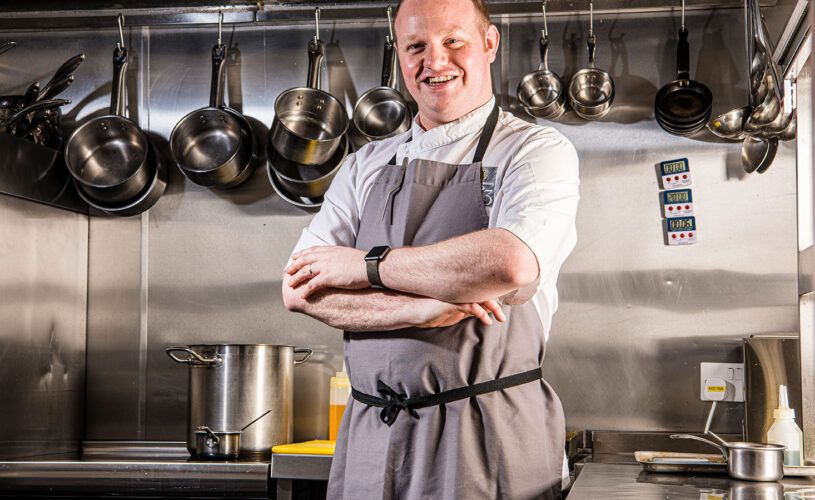 “Judging by the faultless and original menu he’s cooked tonight, [Phil] seems someone to watch, a rising star with a distinct and elegant style all of his own.”

In just over four years since opening, this 28 year-old has taken a brand new business in a seasonal tourism hotspot and turned it into an award-winning, year-round ‘foodie’ destination.

With two AA rosettes, winner of the prestigious Cumbria Tourism ‘Taste’ Award and a Cumbria Life Readers’ Award, clearly this young and dynamic chef is doing something right in the kitchen.

Phil’s love of cooking started early in life as he learnt the basics well thanks to his grandmother. ‘Nanna’ brought him up hanging off her apron strings in the family kitchen and a seed of passion was sown.

Catering college was a natural choice and Phil undertook his formal training at Kendal College. Once there he quickly made a name for himself as a hard-working and committed team player. Studying both full time and part time, Phil tackled both sides of the fence, kitchen and Front of House, and achieved NVQ Level 2 followed by Level 3 in Front of House and Pastry. The latter stood out in particular thanks to a fruitful partnership between Phil and now Instagram baking sensation, Julie Jones. Julie and he bonded over bakes and a firm friendship and mutual professional respect has since been established.

“Phil’s enthusiasm and passion for cooking is completely infectious.  Some people are born to cook and Phil definitely falls in to that category.  When you love cooking as much as Phil does, you can taste it.  He is an amazing, inspiring and gifted chef.”

Julie Jones, The Soulful Baker and Phil’s partner in crime at Kendal College.

Phil also made the cut to join the Kendal College Culinary Team and cooked in Porto, Northern Portugal.

Lecturer Yannick Lequitte remembers him as “a brilliant pastry chef – very committed, very imaginative. His partnership with Julie Jones was wonderful to watch; they bounced ideas around and fed off each other’s creativity. He’s a great guy – always willing to learn and push the boundaries, soaking up new ideas, retaining them and reinventing them.”

Since graduating in 2011, Phil has been invited back to the college on two occasions as a Guest Chef. Always generous with his time and expertise, Phil is now giving back to the establishment that gave him so much.

Phil’s early career saw him rise from the role of part-time Kitchen Porter at a popular Penrith pub to supplement his studies to Head Chef of the same establishment in just 18 months. Next was the Black Swan at Culgaith; here as Head Chef he thrived on delivering high standards of food and customer service. He also took responsibility for training and mentoring colleagues, both kitchen staff and front of house.

However it is at 1863, Pooley Bridge’s restaurant with rooms that Phil has truly made his mark. He joined owners Anne and Mark Vause in May 2016 as they relaunched their business following a £500,000 refurbishment project. In the early days, Phil held the fort on his own. Today, thanks to a lot of hard work, dedication and skill, Phil is joined by three chefs with a combined mean age of 25.5 years! Between them they’ve worked with over 30 local, regional and national suppliers to create hundreds of dishes – there is always something new in development in the 1863 kitchen.

His carefully structured menus allow customers to savour all three courses while his commitment to quality local food in season means there’s always something new to try.

When asked about his current role, Phil commented:

“To have the chance to be involved in a new business venture right from the off is on most Head Chefs’ bucket lists. I’m enjoying every moment here and am so proud of all we’ve achieved together. I’ve particularly enjoyed the opportunity to create innovative, seasonal menus using produce that really is as local as it could be –  Jean’s fantastic kitchen garden veg, Henry’s pungent mint, Dexter beef from Askham and my mum’s raspberries!”