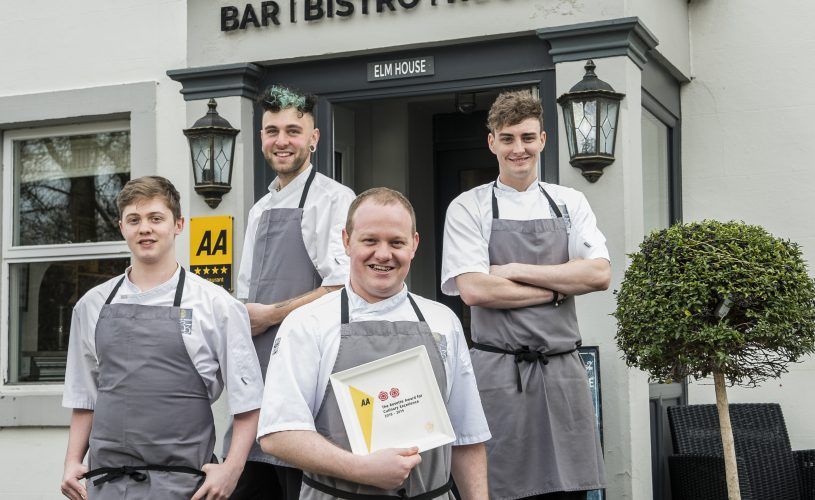 Today, Thursday 21 February 2019, Ullswater’s award-winning restaurant with rooms, 1863 in Pooley Bridge has been announced as a finalist for ‘Best Restaurant’ in the Cumbria Life Food and Drink Awards.

The two AA rosette restaurant has been making waves on the Cumbrian food scene since it opened in Summer 2016. 1863 offers innovative food prepared with skill and love by a dedicated kitchen team, served by knowledgeable and professional staff in a relaxed environment.

Carefully-structured menus allow guests to savour all three courses yet not feel ‘stuffed’ by the end. Ingredients are often foraged, largely local and always changing meaning that customers regularly return (some as often as once a week!)  to try the latest new dish.

In the kitchen, Head Chef, Phil Corrie leads a young, talented and ambitious team comprising four chefs with a combined mean age of 24.5 years! Between them they’ve worked with over 30 local, regional and national suppliers to create hundreds of dishes – there is always something new in development in the 1863 kitchen.

And the team’s dedication and commitment has not gone unnoticed; in addition to two hard-earned AA rosettes, the venue also won the ‘Readers’ Award in 2017’s Cumbria Life Food and Drink Awards and were also finalists in both the ‘Boutique Accommodation’ and the ‘Taste’ Cumbria Tourism Awards.

Owner Mark Vause commented:
“Being named a finalist for any award is always an honour. We’re particularly in awe of this ‘Best Restaurant’ achievement as we really are up against some major players with incredible reputations. Whatever happens on the big night, we’re just delighted to be part of it!”

The finalists are L’Enclume, Rogan & Co, Craig’s Kitchen and 1863 – between them, they share 12 AA Rosettes and no less than three Michelin stars! Team 1863 must now wait until 21 March and the awards ceremony at Kendal College to find out if they’ve beaten off this incredibly stiff competition to win the ‘Best Restaurant’ title. For more information on their A la Carte or Tasting Menus and to book, please visit www.1863ullswater.co.uk